Discussions and updates on your new bike, your new build, your wishes, wants and desires
807 posts

Last night I took a look at the right HT lead. It was deffo wobbling a bit in the coil, but not super drastic. I have put a single turn of electrical tape around the outside of the lead so the terminal has a fatter thing to bight into, seems much more secure now.

I've also put the needles back to the middle clip position. By the time I finished it was too late to start her up.

I've just had a go now. The right plug still isn't firing properly. It idles roughly and stutters a bit. Pulling the left cap off (wearing thick gloves!) while it's running kills it instantly, pulling the right one off makes it run worse but not die.

I did however discover by accident that when the right cap is only half on, so put loosely on but not 'clicked', it idles way better...like a sewing machine. A very loud sewing machine. Blips of the throttle are met with a proper perky snap of engine revs.

So there just be something up with how the cap is actually fitting on the plug. They're both pretty much brand new genuine NGK bits. It doesn't make a huge amount of sense though, when I was messing with the HT lead yesterday I checked the resistance from the coil end terminal to the plug centre electrode - 5kOhm, exactly as it should be.
Last edited by Mr. Dazzle on Fri May 13, 2022 10:17 am, edited 1 time in total.
Top

That would seem the obvious conclusion, but I measured the plug-cap-lead-terminal combo on the bench and got exactly the right resistance. Also seems weird that if you don't "click" the cap onto the plug it works.

Could also maybe be a duff plug which is broken inside, so moving the cap changes which part of the terminal it connects with? Clutching at straws really.
Top

Either sound possible, I'd replace the plug cap, and then the plug, but you could also have a plug lead with an internal break and moving it is making the connection better
The fat cheese is hard to please
Top

But then again, so is the plug

I do seem to recall I dropped the plug at some point though...
Top

Swap the plugs between cylinders, if the issue follows then you know it's the plug.
Top

Pretty sure I've got some spare plugs too.
Top

My money is on a faulty plug, current will rise the further the spark has to jump. Properly clipped on will be weaker spark need to reach the plug.
Top

A new double ended coil with bonded wires will help, too!
Top

Fitting a couple of extra cylinders, CV carbs and Japanese electrics would work wonders too, but that's what my CBR is for

Fitting a couple of extra cylinders, CV carbs and Japanese electrics would work wonders too, but that's what my CBR is for

Don't bet on it, I ended up binning the wiring loom, electronic ignition, coils, leads and plugs on my 1982 Kawasaki, 40 year old Japanese electrics are no better than any other countries, I've got a 1983 YPVS 350 waiting for me to get the enthusiasm to rewire it as it's existing wiring loom is a rat's nest of bodges.
The fat cheese is hard to please
Top

I needed to make an urgent journey recently, but Mrs. D had the car....so I went out to the garage and thumbed the starter on my 1998 CBR, a bike which has just been abandoned in the garage for 5 months.

My 1990 65,000 mile FZ750 does the same, but the wiring has never been "repaired" there's a definite improvement in the quality of bikes that happened in the mid 80s.
The fat cheese is hard to please
Top

I just tried swapping the plugs and the problem did indeed swap sides.

I had a spare plug in the garage, so I chucked that in and all seems well now. At idle at least!

It's the wrong grade of plug though, s'one "number" too cold. Enough to make the point though.
Top

I went for a quick spin at lunchtime, incorrectly graded spark plug and all.

It's miles better than it ever has been, in all the times I've ridden it. Just to recap where I am, I've put the carbs back how they were following the rebuild, I've reset the float heights (were massively rich before) and replaced the duff spark plug and HT lead. The carbs are now set quite a bit richer than stock, but this bike also has open carbs and pipes, plus racier cams.

Starts first kick no problem at all now. Idles just fine. Flicks off the throttle give snaps of revs, previously there was a 50/50 chance you'd kill the engine instead. The really big difference is coming back down to idle though - it doesn't die!

Power is hugely increased. Low and mid range revs are massively better behaved too. You still need a little bit of finesse to get up through the revs, you can't just crack throttle, but by and large it's a straight relationship between throttle and engine now. It's got so much bottom end it's ridiculous, you have to recalibrate your riding. The engine is super long stroke and tops out at 7000rpm (if you're brave enough), but the low down torque is nuts for anyone used to riding a modern ~600cc bike.

Just need to do the finer points of pull chops etc. now hopefully. Oh and get the right spark plug.

EDIT: Just been and whipped the plugs out now the engine has cooled and I don't risk 2nd degree burns on the exhaust headers.

This is not based on any attempt to ride at a set throttle, just 10-15 miles of general tooling about. Theyre not too bad, there is still some tuning to so but previously they got covered in black fur within 5 miles. 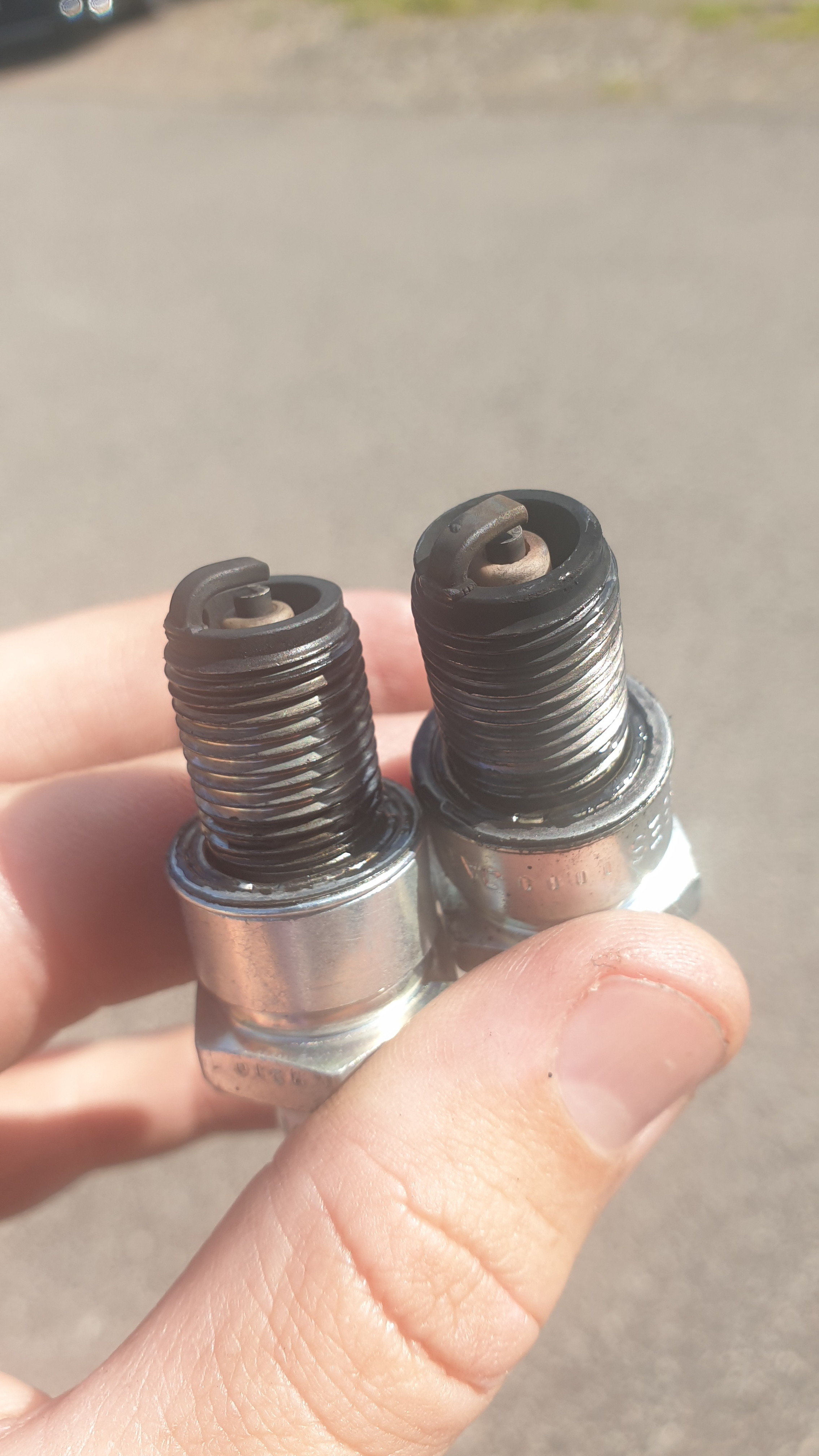 The cold plug won't hurt it, it'll just make it harder to start, on two strokes we always tried to run the coldest plug we could get away with as it made them les likely to hole pistons, on race bikes it wasn't unusual to start the bike on a hot plug and then change to a cold once it was warmed up.
The fat cheese is hard to please
Top

I had a spare plug in the garage, so I chucked that in and all seems well now. At idle at least!

It's the wrong grade of plug though, s'one "number" too cold. Enough to make the point though.

I have found that if you start cars/bikes every now and again and don't actually take them for a run, it must be the carbon build up not getting burnt of as they are never getting up to temperature, the plugs seem to die. No amount of cleaning can bring them back to life.
Very common and you can usually get them to perform as they should by making the spark jump, increasing the voltage. Soon as you plug the lead back in, they start to misfire again.
Top

I've counted up how many bolts have escaped from the fairing. 5, out of 12

So today I shall be ordering a load of stainless Button head screws, locking nuts, washers, rubber wahsers and thread lock.

I took a brief vid yesterday to show my Dad the bike running. It's actually quite alarming how much the screen moves when you rev the engine.
Top
807 posts