Discussions and updates on your new bike, your new build, your wishes, wants and desires
146 posts

Yes, better to have a mildly annoying surprise now rather than a massively unpleasant one a few months/years down the line...
Top

Yes I know and your experience was mainly why I did it.

Although 560 quid for a non blow up still feels painful as it was an extra 200 for the rockers plus shims.

Worse I think (and yes I've been dwelling on this

) is that mine had the new style rockers, was serviced every 3k rather than the 6k quoted, has been fed 18 quid a litre oil from new, always warmed up before being ridden and all round been bloody well looked after. I've never doted on a bike so much. And still I've had to folk out 560 notes to prevent a blow up on a 5 year old/12k mile bike.

I think that's the problem for me over the money as such that no matter what I do your not safe.
Top

Do you know the thing I hate most about KTMs? Its that they make such cracking bikes and I can't help but like them. But the reality is, as a manufacturer, they are a shower of shite. They have no problem chucking out bikes with inherent faults and play the numbers game and rely on the punters sucking it up as they are a ready to race bike.

Ignore me I'm in a strop

If it's left a bad taste in your mouth maybe it's time to chuck it in for a Yamaha.

It's on the cards. In fact without covid would probably have happened already for an MT09 variant or Kwak Z900 late last year or early this. Mrs is still furloughed and until I know she def has a job I don't want to take a loan out or raid savings. Which has made all this more annoying. So short term the Duke is staying.

It's all very annoying though as the Duke is still bloody awesome to ride. So at least I've spent money on Something I like!
Top

I think what @Taipan says sums it up. Great bikes with baggage.

and that pink bit on the end is actually brain matter.

Ohhh, that's helpful. Had an outstanding PPI claim for my Z750 loan back in 2006. Just had it pay out. Only £293 but pays for the rocker arms thumbup:

Battery has come back into the house as doubt I'll ride till it warms up. Looks like some dialectic grease was added to the terminals during the service

Took the opportunity to pack out the back of the terminal with some non slip matting to stop it being such a bastard to locate the bolts when reconnecting the battery took bloody ages fiddling last time as the screws are ever so slightly short so ended up holding them in place with a screwdriver head. Hopefully this'll make it easier. 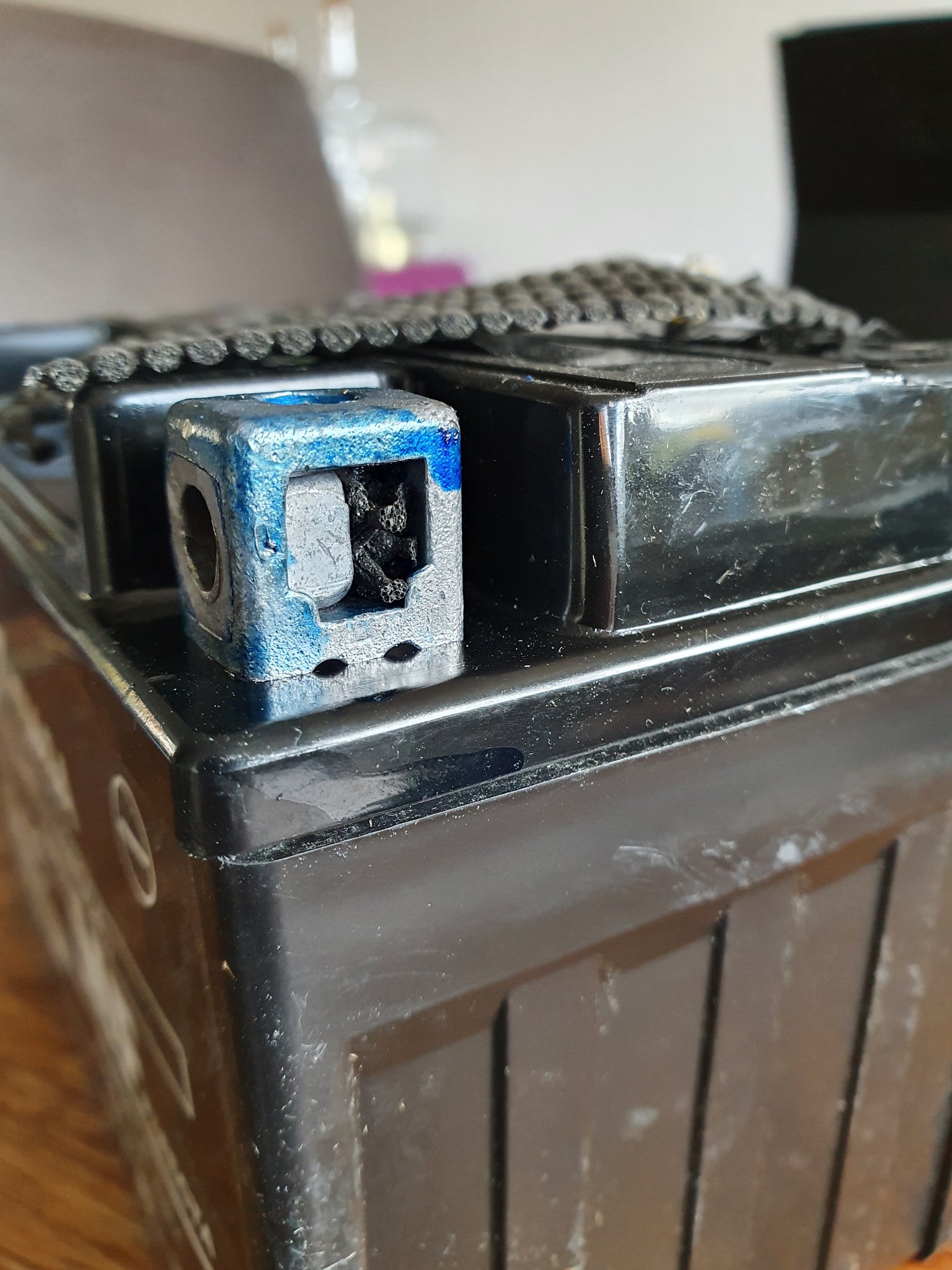 Noticed that some of the bolts on the engine have lost their finish and are starting to look grubby/starting to rust. Pants. Still guess it was likely to happen at somepoint.
Top

You could do with a garden wind turbine to get some power to that garage. Always seems to win the fight with solar.

Really you should be able to leave a bike for months and months without worrying.
app.php/groupsub/subs
Top

Your right probably fine but takes a couple of mins and stops cold getting at it.
Top

I ran a catenary wire from my house to shed to get power to it. As long as the cable is well above anything that passes it should be OK. Mine's about 3 metres above ground level but there's no vehicle traffic (apart from my bike).
Top

mangocrazy wrote: ↑Thu Apr 15, 2021 1:48 am I ran a catenary wire from my house to shed to get power to it. As long as the cable is well above anything that passes it should be OK. Mine's about 3 metres above ground level but there's no vehicle traffic (apart from my bike).

Yeah that's that the problem there's my garden, then a short access road for the other garages to cross. Hence taking the battery out is easier.

On another note I contact Wemoto about the battery and they said if it's not leaking it should be ok but that it shouldn't have happened. That was a couple of weeks back. Yesterday they did a follow up call to check everything was ok and apologise again. They said any problems call them.
Top
146 posts