"Fake" tools. Got any? Would you buy one?

"Fake" tools. Got any? Would you buy one?

A friend of a friend uses those fake/copy tools. I didn't realise it was a fake Makita until he told me. I just didn't notice. I was a bit taken back at it and asked how he got on with it. HE said it was more than good enough for what he uses it for and he can buy 4 or 5 of them for the price of a Makita? I'm intrigued so I've bought one for £32 delivered! I'll review it if it (ever) arrives. I guess at that price, its never going to be an expensive mistake!

If I was using it occasionally and not dependent on it for my livelihood I'd give one a shot. In my experience it's usually the batteries that are the weak spot on cheap cordless tools although I've had a drill that I got from screwfix about 3 years ago (their in-house germanic sounding one) and it 's always ready to go despite little use.
Top

Not really, I've bought knockoff De-Walt batteries years ago when the original ones took the piss price wise but more recently the manufacturers got better with that.
The knockoff batteries were OK i guess but I'm more concerned about the batteries and chargers catching fire nowadays.
The tools catching fire kind of less of a concern cos you have it there and with luck it doesn't get chance to take hold and burn my house down.

Mind, saying that I've seen footage of lithium ion batteries getting going and I don't think I fancy that in my hand either.
Top

I'll happily buy own brand or budget ones as they mostly do the job fine. I'm not so sure about buying ones pretending to be a premium brand, even budget brands care about their reputations but knock offs won't.
Top

Well this became a never ending story lol. Original order got delivered to somewhere on Derby and had to start an appeal thing which got me funded. But they then sent out another one and recharged me for it! So I’ve now got to return it or keep it. I’ll return it as during this time I ordered another off if eBay which has just arrived. D’oh!

So it looks like I could be the proud owner of 2 drill ornaments!!

I will try and get a battery for it as it’s the same as the one I used recently to build some furniture and a fence panel and it was a lot nicer to use than my current Makita. Wonder how much of a saga buying a battery will be!! 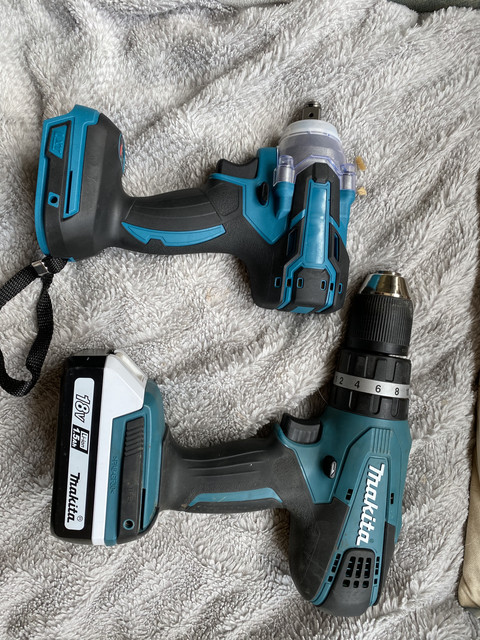 Just asked my mate if this looks like his Makita and if so what number is on the battery? He said yes and he'll drop me a charged battery round as he has several.

DefTrap wrote: ↑Tue May 18, 2021 6:45 pm Yeah Makita keep changing their batteries - all my stuff is still the red nicad type

The cheap Makita 1.5ah batteries are a different mount to the more ‘pro’ 18v 3ah and up batteries.
Top

Been recommended this company for pattern batteries, need a few for some Milwaukee tools I have

From what my mate mumbled I think he was saying the newer types are LXT? He said my drill above is the old type and you won’t see many trades with them?
Convertible Tart #1a

I used the drill today to dismantle some furniture. Very impressed. Tis a lovely thing to use and much nice than my other Makita drill.Can't wait to use it as a impact tool on the car or bike.